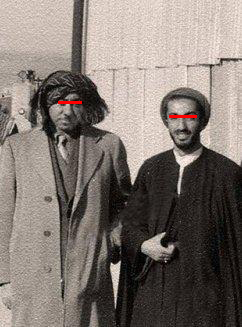 To the right is a picture from 1953 of two Rafidi Innovators and deviants. The first is Sayyid Qutb. He was poisoned by Western, European materialist philosophies in the early part of his life, and in particular Socialism and Communism, and this ideological nurturing carried through into his Islamic days when he started writing his manhaj of the Raafidah and the Khawaarij in his books, from the earliest ones (late 40s early 50s) to the hardcore Kharijite books in the 60s. The Shaykh, Mahmood Shakir refuted this Rafidi Khabeeth in 1952 when a written battle took place in Egyptian newspaper columns between Shakir and Qutb. We have documented some of that in other articles in more detail (see this series). Sayyid Qutb made takfir of some of the Companions and belittled Uthmaan (radiallaahu anhu) upon an ideological conviction and not a mere slip of the tongue. That ideological conviction was a Marxist, Communist notion of social justice and Qutb evaluated early Islamic history upon those ideas (see here), leading him into his Rafidee poison, which Mahmood Shakir aptly described as the "malice of the idolatrous western civilisation manifesting explosively in the heart of one claiming da'wah". Out of resentment Qutb altered some of the wordings he used in some of his books. The written record and Qutb's response to Shakir proved that he resented being corrected and he never removed the ideological conviction from his books which he published (in numerous editions) right until the end of his life. In fact, it was not possible for him to remove the ideological conviction since his books were actually founded upon it in the first place, which means that he could never really retract from reviling those Companions. At the end of the article, inshaa'Allaah, we will lay to waste the claim that Qutb recanted through a few simple observations.
The Qutbiyyah have tried bending over backwards, forwards and sideways to try, vainly, to prove that Sayyid Qutb made tawbah from his takfir of some of the Sahabah and belittlement of others amongst them. We have addressed some of these vain attempts by the Ghulaat al-Murji'ah in these articlels (see here, here, here and here). Two drowning Qutbis involved in these vain activities are Abu Zubayr Saleem Begg (London, UK) and Abu Fatimah Salman Awan (Mobile, Alabama) - both of these envious and hate-filled takfiris spent time in Makkah (Salman Awan is still there) where they often huddled under the wings of that kadhdhaab Safar al-Hawali from whom they learnet the art and science of practical irjaa' that we alluded to earlier (see further below for a detailed treatment of it).

The second heretic in the picture is Nawab Safawi al-Shi'iyy. He was a revolutionary who was trying to ferment a revolution against the Shah of Iran and was a leading member of the Fedayeene Islami (a revolutionary group like Sayyid Qutb's Ikhwan) and was involved in assassinations. Like his friend, Sayyid Qutb, he was imprisoned numerous times for his activities. Nawab Safawi was also an associate and ally of Ayatullah Khomeini who later led the Iranian revolutoin in 1979. It is also interesting to note that the concept of jaahiliyyah (all modern societies are disbelieving societies) was common between Mawdudi, Qutb and Safawi and upon this ideology rested their revolutionary methodologies. 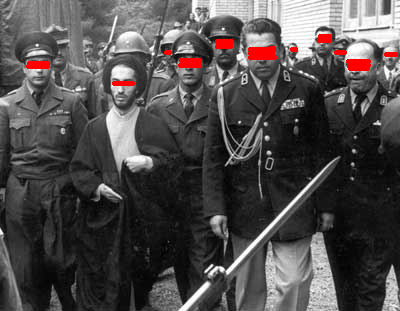 In 1955 Nawab Safawi was involved in an assassination attempt upon Hussain Alaa, the Chief of Ministers, and he was subsequently given the judgement of execution along with three others. The Ikhwan al-Muslimeen in Egypt were part of a group that tried to convince the government of the Shah to excuse him from execution, but this was not granted and Nawab Safawi was executed in 1956. See this resource.

A statement related from Nawab Safawi is: (من أراد أن يكون جعفرياً حقيقياً فلينضم إلى صفوف الإخوان المسلمين), "Whoever wishes to be true Ja'fari (Shi'ah), then let him join the ranks of the Muslim Brotherhood" as occurs in Mawqif Ulamaa al-Muslimeen Min al-Shi'a of Izz al-Deen Ibraaheem (p. 15). And Umar al-Tilmisani, the third supreme leader of al-Ikhwan al-Muslimeen wrote in his book "Dhikriyaat, Laa Mudhakkaaraat" (p. 131), (كان طلبة الإخوان يحتفلون بذكرى نواب صفوي رئيس جمعية فدائيان إسلام الشيعية في إيران), "The students of al-Ikhwaan used to celebrate the mention of Nawab Safawi, the leader of the Jam'iyyah Fedaa'iyaan Islaam al-Shi'iyyah in Iraan." He also said in the same book, (ولم تفتر علاقة الإخوان بزعماء الشيعة فاتصلوا بآية الله الكاشاني واستضافوا في مصر نواب صفوي ، كل هذا فعله الإخوان لا ليحملوا الشيعة على ترك مذهبهم ! ، و لكنهم فعلوه لغرض نبيل يدعو إليه إسلامهم وهو محاولة التقريب بين المذاهب الإسلامية إلى أقرب حد ممكن), "And the connection between the Ikhwaan and the leaders of the Shi'ah did not slacken. They connected with Ayatallaah Kashani, and they invited Nawab Safawi to Egypt (hosting him as a guest). All of this was done by Ikhwaan not in order to make the Shi'ah leave their madhhab but they did this with a noble objective which their Islam called them to, which is to try and bring closeness between the Islamic madhhabs to the closest level possible."

What al-Tilmisani is alluding here is Sayyid Qutb reaching out to both Nawab Safawi and Ayatollah Kashani. In 1953 the Muslim Brotherhood invited Nawab Safawi to Egypt, and we have pictures of this Rafidee with Sayyid Qutb on that occasion. That there should exist this type of cordiality, love, friendship, affection (as described by the editor of "Risaalah al-Taqreeb") between Sayyid Qutb and the Raafidah is not very surprising because Sayyid Qutb made takfir of Mu'awiyah, his parents (Abu Sufyan and Hind) and the Companions from Banu Umayyah. He also belittled Uthman (radiallaahu anhu) - and all of this was due to a Marxist, Socialist reading of Islamic history. Qutb was poisoned by Western (European) materialist philosophies before turning to Islam and that poison came through in his books (Social Justice in Islam, Battle Between Islam and Capitalism). Another Rafidee, Ayatollah Khamenei was very impressed by Sayyid Qutb and his writings and he initiated a translation of one of his works, and in the 1970s Qutbs revolutionary ideas were instrumental, along with those of Ali Shariati, in aiding the Iranian revolution. Sayyid Qutb himself was influenced by the writings of Abu A'la Mawdudi who also had that Rafidee poison towards Mu'awiyah and the Banu Umayyah and Abu A'laa Mawdudi was a very close friend of Ayatollah Khomeini as indicated by his own son who wrote a book on the subject of the close relationship between the two. Mawdudi praised the Iranian revolution as a true Islamic revolution. Further, Khomeini was also a good friend of Nawab Safawi (who was executed in 1956 for an assassination attempt on Hussain Alaa, a minister in the government) and they had history together.

When you stand back a little and just take a look at all these names, Ayatollah Kashani, Ayatollah Khomeini, Nawab Safawi, Ayatollah Khamenei, Sayyid Qutb and Abu A'laa Mawdudi you are seeing the synthesis of Rafd and Kharijiyyah. Namely, the original hatred, resentment, takfir, and revolution against the Companions of Allaah's Messenger initiated by the activities of one Abdullah bin Saba' al-Yahudi who raised the flag of "social justice" and roused up the vagabonds and criminals leading to the assassination of Uthmaan (radiallaahu anhu) and subsequently leading to all the tribulations.

Be not surprised then that Khomeini, Khamenei, Nawab Safawi, Kashani and Sayyid Qutb all held the belief that Mu'awiyah and the Banu Umayyah were kafirs and all of them have that revolutionary, kharijee methodology and we see the same slogans coming from them all, "Imaamah" (leadership) "Haakimiyyah", "jaahiliyyah" (Mawdudi, Qutb and Nawaba Safawi all outlined this doctrine), "al-Adaalah al-Ijtimaa'iyyah" (Social Justice).

It would be wise for you to remember that historically, Rafd has ties to Khaarijiyyah since both these innovations were borne out of the activities of the Sab'iyyah, Abdullah bin Saba' and his followers. Qutb actually praised the revolution of Abdullah bin Saba' against Uthmaan (radiallahu anhu), stating that it was an outburst of the true Islamic spirit, even though he acknowledged it was a plot by Abdullah bin Saba' (see here, here). So the hearts of these people are all the same. You see the same ideological poison running through their veins, hearts and minds, and you see them all cordial with each other, whilst attacking the choicest of Companions, indeed the writer of revelation, Mu'awiyah (radiallaahu anhu).