Habib Ali al-Jifri is an extremist Sufi and saint-worshipper who actively calls to saint-worship. His affair is clear and known and the Scholars of Tawhid and Sunnah have spoken of him and his devations and stated that he is a caller to Shirk. His khuraafaat (superstitious deviations) are very many and can be found in abundance on the tube and elsewhere.

What interests us in this article is highlighting the Ikhwani methodology and policy which is to open arms to all the innovators and deviants as part of a broader framework of mobilizing masses for a higher political agenda (replacing current authorities). This is the manhaj of the Sufi Ashari dissimulating politician Hasan al-Banna and it is carried today by treacherous innovators such as Salman al-Awdah who show love and accommodation for the Rafidah, Sufiyyah and work sedition against the authorities of Tawhid and Sunnah in the name of "social justice and freedom." On a satellite TV chat show, Habib Ali al-Jifri was a guest and he spoke of "Salafi" scholars and his relationship with them. You can listen to the audio clip in which he says:

The other affair is the approaches taken in interacting (with others). I have met (different) types of people from our brothers, scholars who ascribe to the Salafi manhaj, and they present (as) scholars for Salafiyyah. And I found amongst them those who are able to show mutual understanding with others, such as Shaykh Salman al-Awdah, and I found amongst them very gentle in speech with people such as Shaykh Aa'id al-Qarnee. I sat with my brother Shaykh Muhammad Hassan, and he honoured me (by) visiting me at the hotel when we were in Dubai to deliver a lecture with him, and I went and I delivered the lecture here in Dubai. I found this type, this rank (of people) and their likes, that we are able to live with each other ... however after that they were [unclear] merely because they met with me, a dreadful attack was made against them by the followers of the Salafis. Salman al-Awdah was reviled and abused merely because he appeared in a picture with me and Aa'id al-Qarnee, his aqidah was questioned, Shaykh Aa'id, merely because he appeared in a picture with me...

Here are some pictures of Jifri with al-Qarnee (left picture) and al-Awdah (right picture): 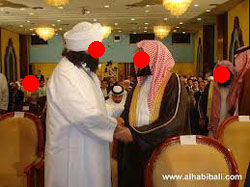 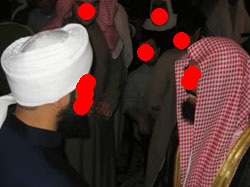 The three names mentioned by Habib Ali al-Jifri are all Qutbiyyah. They are followers and promulgators of the doctrine and ideology of Sayyid Qutb who is a Rafidi (see here), takfiri (see here), Khariji (see here), Jahmite (see here). Sayyid Qutb is one of the two major ideologues of the Muslim Brotherhood, the other being Hasan al-Banna. Between them, they outlined the two strains of Ikhwani thought and ideology represented by a) uniting all the sects and groups into one mass, coupled with b) mass Takfir of governments (and societies) and promoting ideological, then practical revolutions to replace them. This poison was taken by them from the Marxists, Leninist, Communists, and how insightful was the remark of Allaamah Ahmad Shakir over 60 years ago, "The movement of Shaykh Hasan al-Banna and his Muslim brothers (i.e. Muslim Brotherhood), those who have overturned the Islamic da'wah into a criminal destructive da'wah, is financed by the Communists and Jews as we know that with certain knowledge." (see here).

Salman al-Awdah, Aa'id al-Qarnee and Muhammad Hassan are all upon this fikr. They combine between Irjaa' towards the innovators and Khaarijiyyah towards rulers and Scholars, and some of them do so deceptively under the banner of Salafiyyah which is free of them and they of it. When they show such indifference to the zandaqah present in the books of Sayyid Qutb (of Takfir of the Companions, statements of kufr, the doctrines of the Jahmiyyah, Mu'tazilah, Marxists and others) and raise him as an "Imaam of Guidance" and treacherously put him alongside Shaykh al-Islaam Ibn Taymiyyah and Shaykh al-Islaam Ibn Abd al-Wahhaab (as is done by Safar al-Hawali in one of his works) then what else is left but to open their arms to saint-worshippers? That's why you see all the innovators and deviants finding refuge, sanctuary, friendship and accommodation with these Ikhwanis, whilst in their hearts (of these Ikhwanis) there is detectable aversion and resentment towards the Scholars and rulers of Tawhid and Sunnah - as is clear from their outward actions, dealings and behaviour.

Sa'eed bin Jubair said, as occurs in al-Ibaanah of Ibn Battah (no. 89):

That my son accompanies a sinful and cunning scoundrel who is a Sunni is more beloved to me than that he accompanies a devoteful and worshipful Innovator.

Yunus bin Ubaid said to his son, as reported in al-Ibaanah of Ibn Battah (2/466):

I forbid [you] from fornication (zinaa), stealing and drinking wine. However that you meet Allaah with any of these sins is better to me than that you meet him with the view of Amr bin Ubaid and the associates of Amr (i.e. the Mu'tazilah).

That apes and pigs are are next to me in a house, is more beloved to me that a man from the people of desires (deviations, innovations) should be next to me (as a neighbour).

These statements from the Salaf are in relation to the Ahl al-Kalaam and the bid'ahs of the Jahmiyyah, Mu'tazilah. Salman al-Awdah, Aa'id al-Qarnee, Muhammad Hassan and their likes open their arms and cooperate with those who call to Shirk with the Lord of the Worlds, let alone divest Him of His attributes.